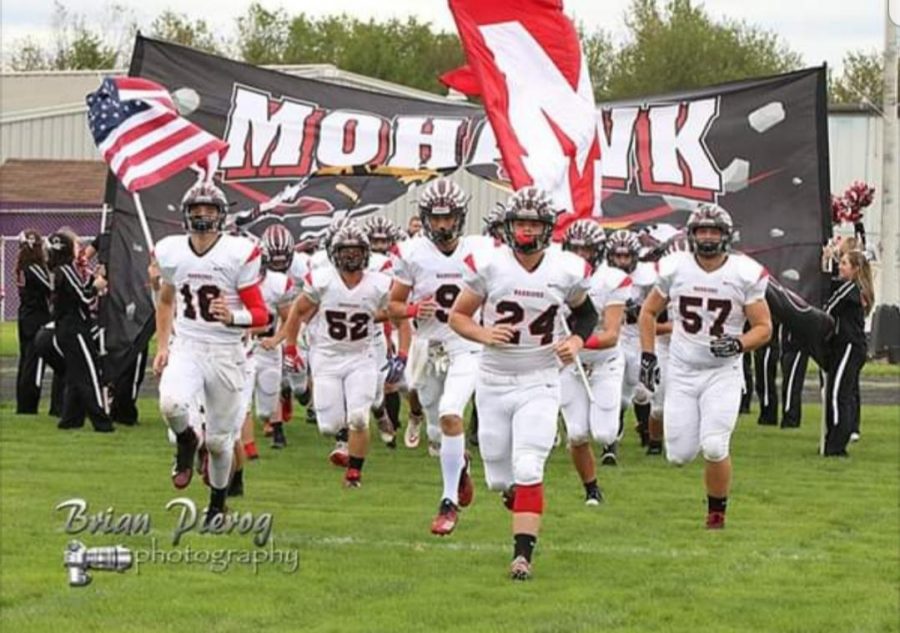 The Warriors’ offense has been like fireworks in the early going of the 2018 season.

However, it was their defense that stood tall on Saturday.

The Warriors found themselves in a defensive slugfest Saturday afternoon against the Golden Beavers, where both teams had their fair share of struggles scoring points all game long. The 0-0 deadlock was broken in the second quarter when quarterback Nick Wheeler called his own number from the one yard line to put the Warriors up 6-0 where that score would stay going into the break. The Warriors found the endzone again early in the third quarter as Wheeler threw a short pass to wide receiver Nate McCutcheon, and from there he took it the distance as he made two defenders miss and outran everyone for a 82 yard touchdown. McCutcheon would go on to have 110 yards receiving on the day off of only four receptions. In addition, his efforts were good enough to receive New Castle News’ “Player of the Week” award. McCutcheon is the third player from the Mohawk football team to be named that honor in only five games into the season. After the long score running back Braydon Cameron churned out a couple tough yards to add the two-point conversion to make it 14-0 in favor of Mohawk. Cameron finished with 125 yards on the ground, which proved to be crucial as the tailback helped keep the clock moving in the second half. The Warrior defense had the “bend but don’t break” mentality the entire game since Western Beaver moved the ball early and often in the contest. However, every time the Golden Beavers were driving and threatening to score, the Warrior defense would make a stand and force the Western Beaver offense to give up the football. The defense had multiple turnovers in the game, with interceptions by Cameron as well as Dmitry Pendro, in addition to a fumble recovery. Turnovers in this game were essential, especially in a game with muddy conditions and since points were at a rarity. After a fourth quarter score by the Golden Beavers that cut the lead in half at 14-7, the defense was called upon once again and made the final stop to seal the victory. The game by no means was pretty, but it ended in a win for the Warriors to improve their record to 3-1 in section play. They will take on Shenango at home next Friday for their Homecoming game.